"Water, energy and food are freely available for all humankind, when we no longer follow the laws of capital, but rather the logic of nature."

Dieter Duhm, from the Tamera Manifesto for a New Generation on Planet Earth 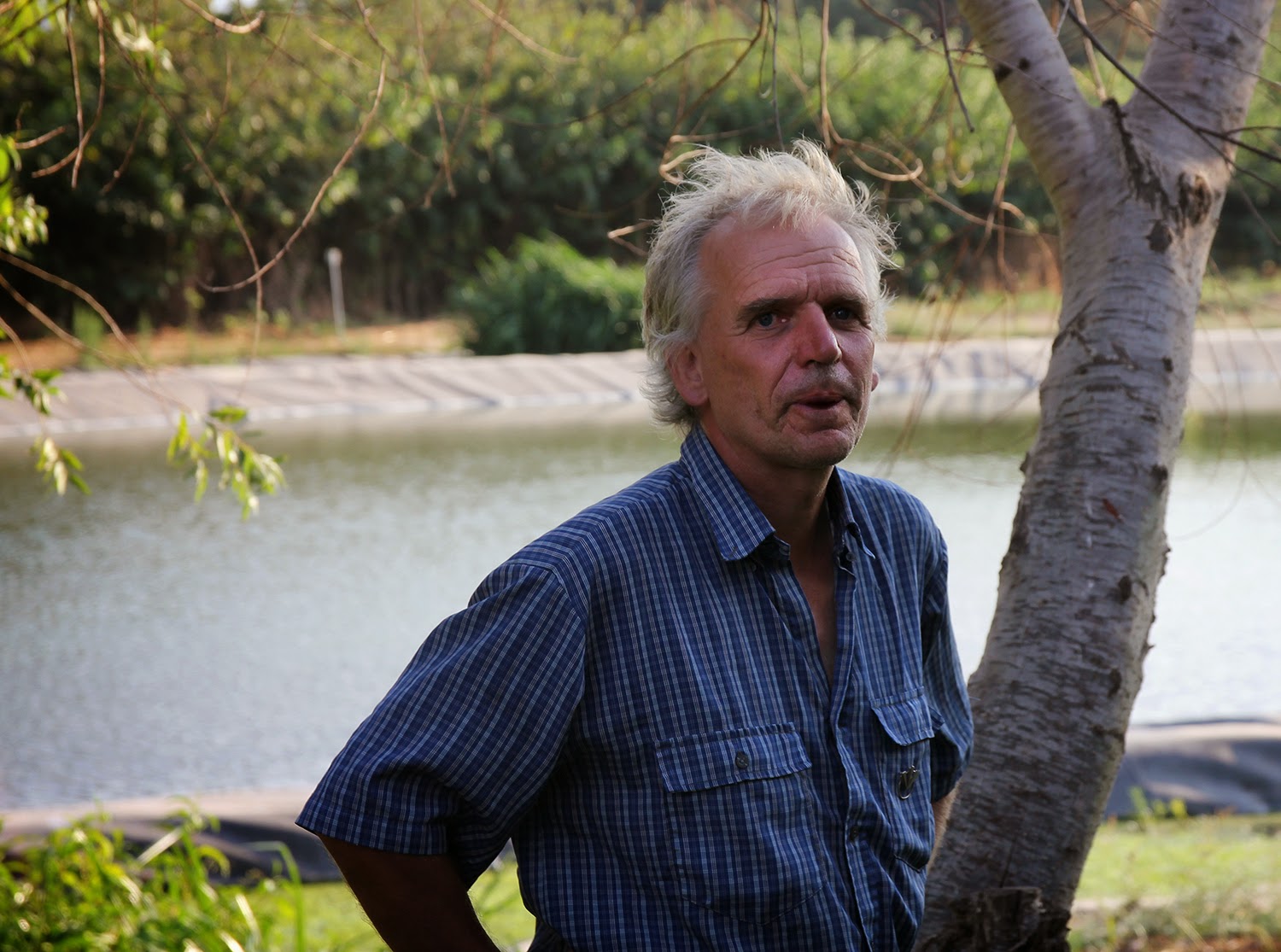 Desertification as a result of water-mismanagement

Desertification is not a result of climate changes beyond human control, but in most cases the result of water mismanagement due to a lack of understanding of the nature of water and the healthy working of a "full" water cycle.


The whole picture of "water as a living being" comprises a full water cycle, which includes the earth and its vegetative cover as a receptacle for the rainwater. A rich and variegated vegetation cover is the prerequisite for "attracting" rain and for the creation of a shaded, cool layer of humus which is able to absorb great amounts of water and store it like a sponge. Water slowly percolates into the deeper layers of the earth where it can "ripen" and absorb sufficient "information" (including minerals). Bern Mueller describes this as the "female" part of the water cycle. Water, which has thus matured over time in the womb of the earth, emerges as healthy, life-giving spring water (which has become a scarcity in our times).

Ruthless deforestation has led to soil erosion in many parts of the world. Soil, which is not protected and shaded by trees, heats up and, as a consequence, can no longer absorb rain water. Instead of filtering into the soil, rain runs off as surface water, and with it washes away precious top-soil. Within a few years, this process leads to desertification, often also "natural" catastrophes like landslides and flooding. In most parts of the world we have come to a situation where a mere 20% of rainwater can be absorbed by the earth - which means that the remaining 80% are lost for any meaningful use!

The worldwide water crisis is not due to natural climate changes or a lack of precipitation, but it is based on our failure to properly manage this precious resource !


The water oasis of Tamera


In the course of the last 8 years Bernd Mueller has transformed the landscape surrounding the Tamera Community in Portugal from a desert-like state into a green Oasis. The climate of the Alentejo area of Portugal, where Tamera is situated, is comparable to that of Israel. Rainy winters (approx 600 mm rainfall per sq. m.) are followed by a short springs and long, hot and dry summers. Inspired by the work of Victor Schauberger, the Austrian philosopher, naturalist and researcher of water, and with the help of Sepp Holzer, an Austrian expert in permaculture, Bernd Mueller created a water retention landscape for Tamera, which is solely based on the optimal management of the annual rainfall. Within this period the Tamera Community has become entirely self-sufficient concerning its water needs.


One of the most striking insights I arrived at as a result of the workshop with Bernd was a profound transformation of my concept of irrigation. In our region, and probably in many other regions of the world with similar climate conditions, irrigation has become an undertaking which is completely detached from the natural water cycle, and even counteracting this natural process. Water is extracted  from springs, lakes, groundwater reservoirs and other natural sources. In the case of Israel, huge amounts of water are pumped from the See of Galilee and directed to the rest of the
country via straight concrete channels (as a result of this and similar actions from the Jordanian side, the Jordan river has been reduced to a mere trickle and the level of the Dead Sea is dropping by about 1 meter every year!). Further on water is forced into pipelines and eventually arrives through plastic irrigation pipes and a tiny hole to just the place where we want it to be - the crop we want to grow and nowhere else! We consider this being a very clever invention which helps us to save precious water. But in reality it is yet another brainchild of our materialistic thinking and our egoistic and exploitative attitude towards nature. We, in fact, steal water and isolate it from its natural context, force it to move in vessels the forms and materials of which are completely alien to its nature. Eventually we withhold it from the earth by only allowing it to feed the plants which we have chosen to grow. Instead of nurturing the earth we let it be washed out and impoverished by selective drip-irrigation.

Bernd Mueller put forward the concept of what can be called a "reversed" or "upside-down" irrigation. Water is not withheld but generously given to the earth to be absorbed by the soil, thus recharging the natural "sponge-reservoir" of the earth. As a result the water table will rise and trees, which work as natural "irrigation pumps" can draw water - and with it minerals and other good things - from the deeper layers of the earth. These substances are not "wasted" on the trees. Instead, the tree generously shares these substances, including water, with its surroundings, both in the upper soil levels and in the atmosphere. As a result, the earth as a whole becomes enriched by moisture and minerals, allowing a varied vegetation to develop which in turn shades and cools the earth and attracts further rainfall. In fact, only by using such "reversed" irrigation, the creation of new soil can be vouchsafed.

Down to basics - how to create a water retention landscape?

The overriding objective of creating a water retention landscape is to design simple devices which help to hold back rainwater, slow down its movement and thus allow water to penetrate into the deeper layers of the soil. This can be achieved by digging channels ("swales") and using the dug-out soil to build dams ("berms") on the downhill side of the swale. These two features together prevent rainwater from running off and allow for a slow penetration of water into the soil.

Swales are dug by following the contour of the landscape in order to prevent water flowing downhill. On a slope a succession of swales can be dug.


The soil downhill from the swale/berm element becomes moisturized from within and suitable for growing fruit trees, vegetables and other crops - without additional irrigation. An additional positive effect might become evident after a few years: further downhill the raised water table most likely will give rise to new freshwater springs, providing clean, cool water for plants, animals and man.

This technique is not entirely new. Ancient cultures like the Nabateans in the Negev desert used similar devices to grow crops in arid climates.


Depending on the particular situation and topography, additional measures like creating larger basins for collecting rainwater can be taken(which means ending up with ponds or lakes - as has been done in Tamera). All these devices are constructed by using natural, locally available materials: earth, stones, plant cuttings etc. No artificial insulation materials are used. Water is always allowed to be in immediate contact and interchange with the earth.

An extended vision for Samania Park

In his workshop at Samania Park (for details about Samania Park - click here) Bernd Mueller elaborated how the principles of a water retention landscape can be utilized at Samania Park. The aim would be to maximize the healing effect of our initial step of cleansing sewage water by ecological means. But instead of storing the purified water in a large, sterile lake, insulated from the soil by plastic liners and then pumping it through irrigation pipes and drip-outlets, he suggested creating a parallel water retention landscape, fed by the purified sewage water, combining a sequence of smaller ponds with swales and berms and careful planting of suitable trees. Such a landscape will complement the already existing sewage purification plant, create a  rich ground for research-work and serve as a showcase for good water-management.


For rounding off the subject, here is a short video about the Tamera water retention landscape:

A lecture by Bernd Mueller:
http://www.tamera.org/fileadmin/PDF/2.2_The_Secret_of_Water.pdf