- explorations of new approaches in drawing

In addition to the classes in "Social Sculpture" and "Creative Strategies" at Oxford Brookes University (which I shall write about in one of the next posts) I am attending a class entitled "Experimental Drawing", a title which intrigued me right away. The course is guided by a number of Oxford based artists, each bringing his/her expertise and individual approach to the theme. Inspired by some of the exercises I made a sequence of works which explore the more "physical" aspects of drawing:

By way of this "physical" approach, some of these drawings have become quite sculptural, almost like reliefs.

An Autumn Day in Oxford 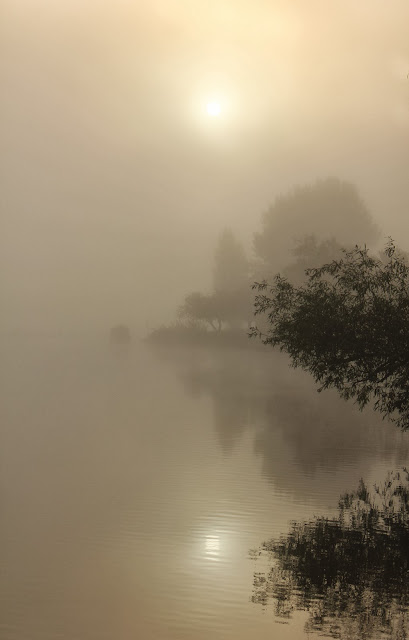 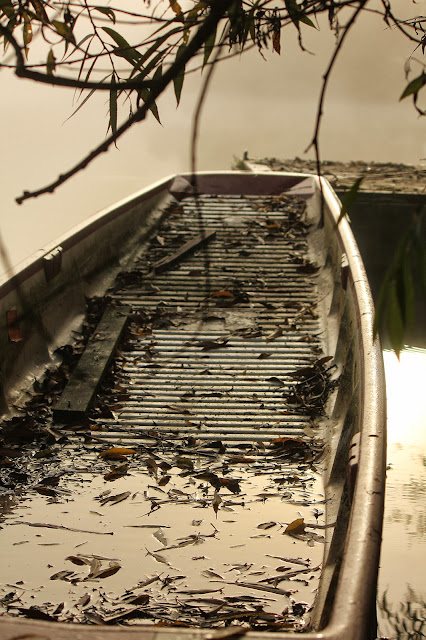 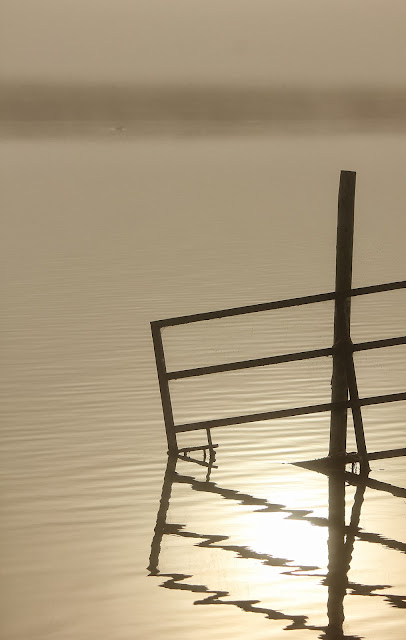 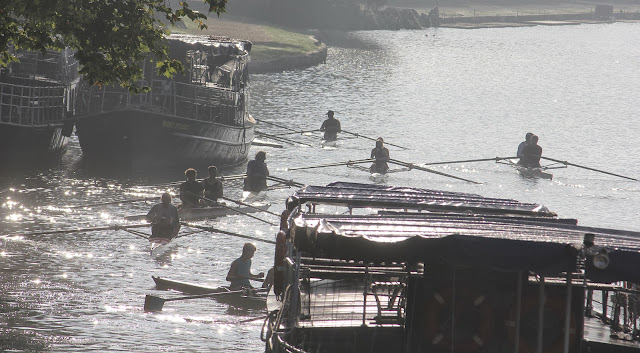 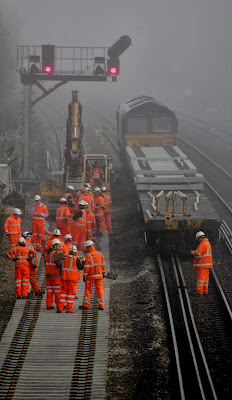 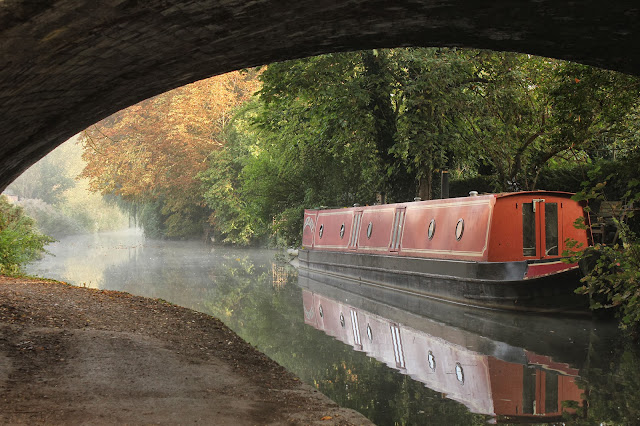 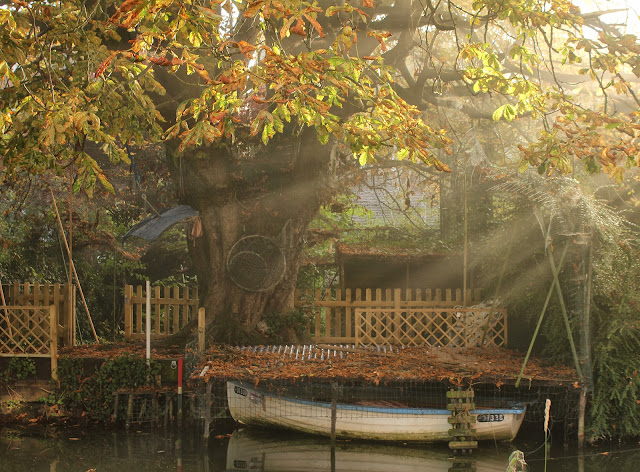 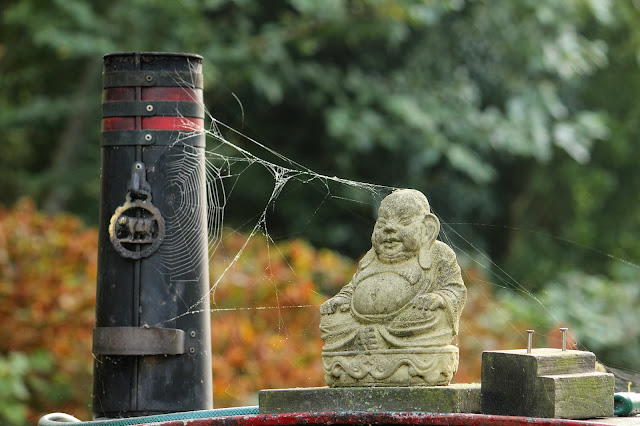 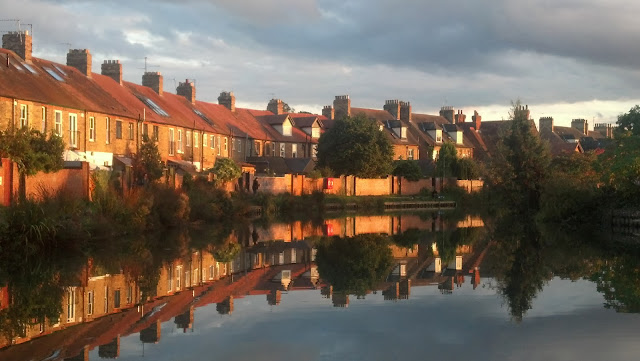 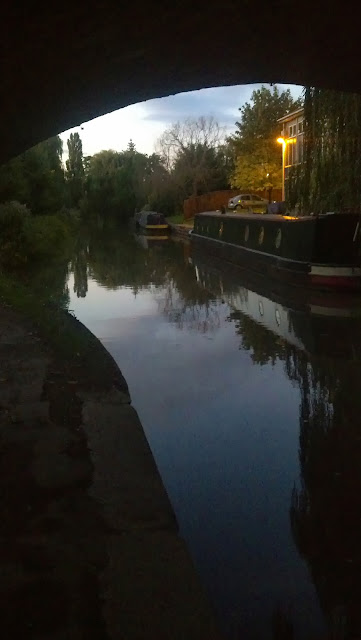 Spirit of Place - a visit to Rousham Park

This is one of my favorite landscape parks which I revisited while staying in Oxford. It is in private ownership and not as commercialized and overrun as many of the better known National Trust properties, but it well deserves a visit. It has hardly been modified over the centuries and preserved its charm and magic. Kent was one of the first landscape architects to heed the famous lines of his contemporary, Alexander Pope (1688-1744):

"Consult the Genius of the Place in all
That tells the waters or to rise, or fall....
Joins willing woods, and varies shades from shades
Now breaks, or now directs, th'intending lines;
Paints as you plant, and as you work, designs." 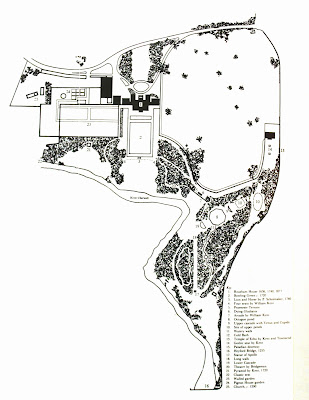 We do not know what kind of a place Kent found, when he started to design Rousham and what "spirit of place" (lat.: Genius Loci) he encountered there. But we can assume that the topography was similar to what we can see today: a level plateau where Rousham House was built and a gentle slope leading to the Cherwell river below.  Kent ingeniously utilized this slope for his "rising and falling waters", a succession of water features, including lakes, cascades and water channels, which are the most fascinating and intriguing design features of this park. 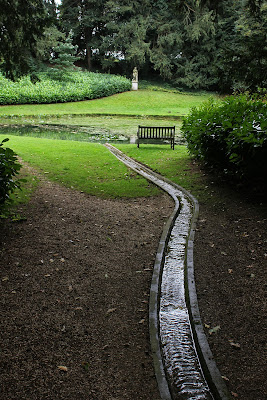 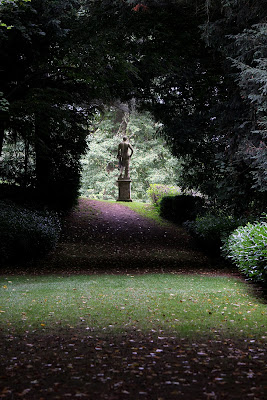 Kent also very skillfully worked with vistas, views towards sculptures or architectural features, which direct the gaze of the walker and arouse his attention. As we follow the call of  the distant sculpture we find ourselves moving in a passage, "varying from shade to shade",  and being drawn  towards the opening of a sunny glade, whose entrance is marked by the sculpture. 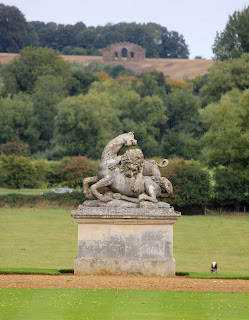 The view from the front lawn of Rousham House is more formal and symmetrical and incorporates a  mock ruin built on a distant hill (which is not part of the Rousham estate) and which serves as an "Eyecatcher", continuing the central axis of the main house to the skyline.
This common device was employed to further integrate the "borrowed" scenery of the distant landscape into the garden, with the effect that the transition from the carefully designed garden landscape to the natural and farming land beyond its borders happens utterly smoothly and without being noticed.


Here are some further photographs of this magic and utterly "romantic" place: 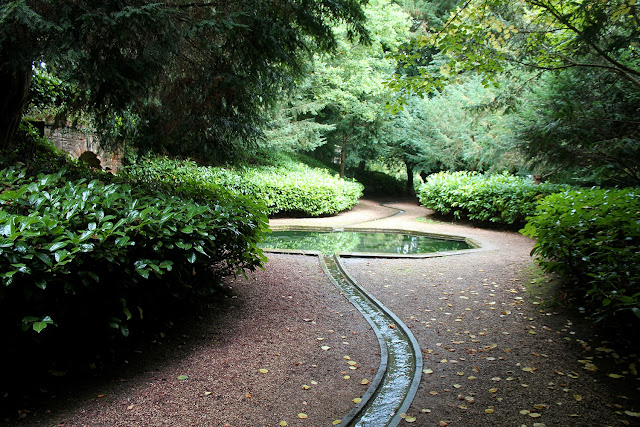 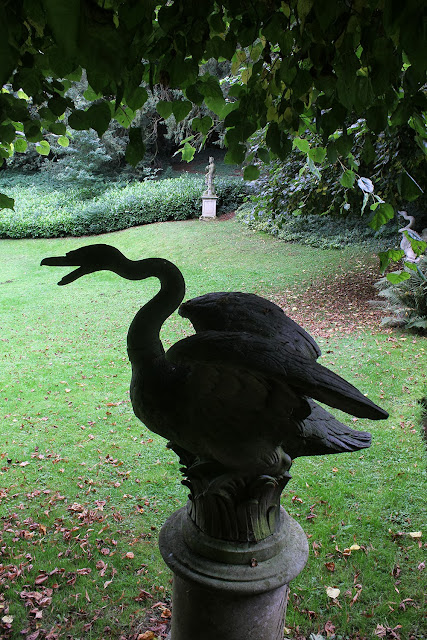 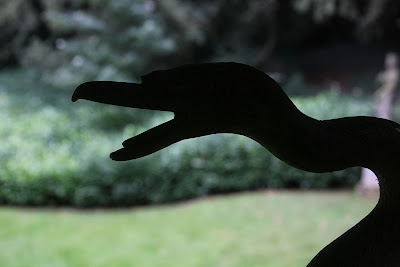 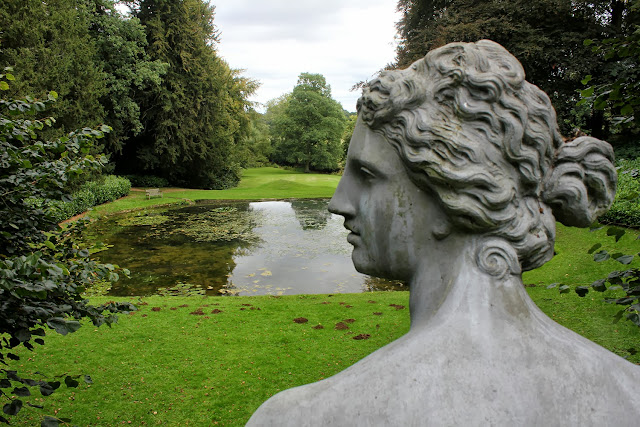 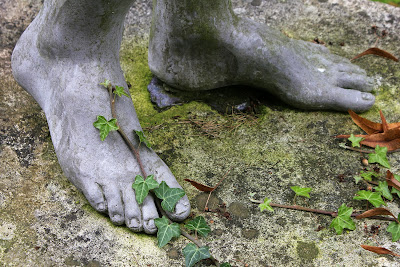 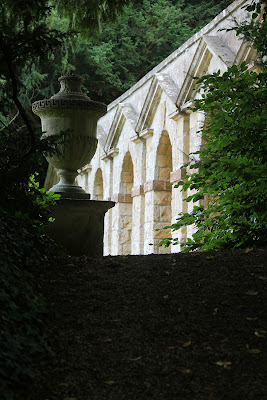 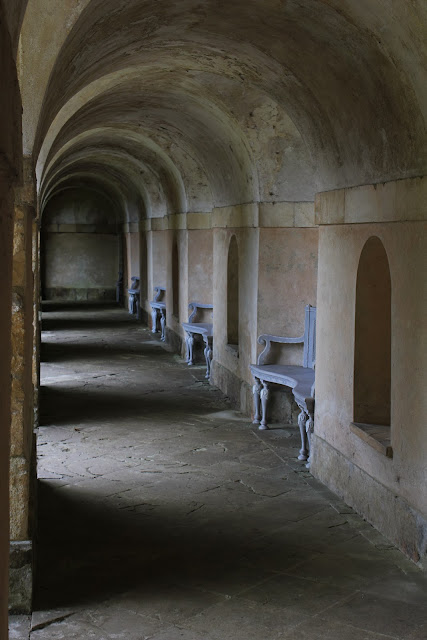 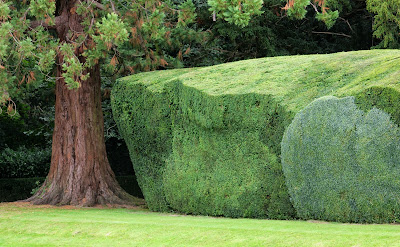 I was invited to be Artist in Residence at the Michael Hall Steiner School in Forest Row during the months September - December 2013. The residence was to include a two day workshop with the faculty of the School and the creation of an environmental community sculpture.

The workshop took place during the faculty workdays on the 2nd and 3rd of September. It was planned to be a follow-up of the workshop which I had conducted at Michael Hall School in September 2012. This had been a Environmental Sculpture workshop on the Kidbrook Estate (the beautiful landscape park into which Michael Hall School is built) which introduced the teachers to the Goetheanean scientific and artistic method of observing and creating in landscape.

In the course of the year which followed, the faculty's landscape group continued the work and looked at various areas of the estate which needed artistic attention. It was decided to focus this years workshop on the area behind the theater, and the group did some preparation work which led to the proposal of a "theme" for an environmental artwork and the decision to ask me to help with the design process and guide the teachers in creating the artwork.

The workshop started with an exploration of the two main components of the design process:

The theme
which the environment group had proposed was "gravity turning into levity". At the outset of the first session a short brainstorming session was conducted to clarify and further expand the theme by adding further qualities the group was looking for. Then I asked the participants to "embody" some of these qualities in a sculptural gesture (in clay).

The site
was the focus of the second session. Participants were asked to divide into groups of 4-5 people and to embark on a detailed observation process of the site. The observation was to employ four consecutive "modes of inquiry":

1. detailed description of the physical, tangible, sensory fabric of the site, including:
2. sensing relationships, movements, the life and history of the place, including:

3. an experience of the "mood" of the place and our "soul response" to the place, using:
4.  taking everything together, we can come to an inkling of the "spirit of the place", its "motif".

As a conclusion of this observation process each group was asked to articulate in artistic form a "gesture", which they would like to contribute as a "gift" to the place. This could be in the form of a short performance or dance, the choreography of which should be the result of a communal effort.

The third session started with a sharing of the groups' observations of the site, which created a vivid picture of both the present limitations and shortcomings of the place as well as the site's potential as a place of meeting between different qualities - and between people. These two aspects of the "spirit of the place" - its present shortcomings and its future potential were written on the blackboard and provided the basis for the design process which followed.

In the following exercise participants worked in groups of 2-3 people on the assignment to create the model of a "spatial intervention" which would address the shortcomings of the present site and its future potential. As possible elements it was suggested to use an arrangement of similar elements, for instance "sticks" (straight elements) or bent wire (rounded elements) or any other material (but only one material for one model).

The second day began with a group observation of the results of the previous exercise and a characterization of different possible approaches. We identified three main aspects of the site which need our attention and which would have to become the objectives for the continuation of the design process:


We continued in four groups of between 4 and five people. This time participants had to relate to the challenge of "scale", working on scale models of the space, relating to the building and including a scale model of a person. Groups could chose to employ one of three approaches: using linear elements, planar elements or voluminous elements.

In the concluding session of the workshop the four models were discussed, common elements and different approaches were identified and the question of realization in different materials was discussed. It was decided that Axel finalize a suggestion, based on the group work, including a study of the feasibility of different materials and their suitability - taking into account that the artwork will be created with community participation.

In the week following the workshop I continued working on the model, trying to take into account the three objectives as well as the various solutions arrived at during the workshop. My final model was discussed and approved in a follow-up meeting with the environment group and workshop participants.


Following the achievements of the workshop, my design includes a suggestion for the use of the theater facade as a "noticeboard" for upcoming events, the addition of a pergola wrapping around the corner of the building, and an environmental sculpture consisting of 7 planar elements. I suggested  to use wooden logs as the main material for the construction of the artwork, having the advantage of being readily locally available and allowing ample community involvement in the creation.

The realization of the project is supposed to commence in the course of October 2013.