- a few thoughts about a controversial and often misunderstood idea 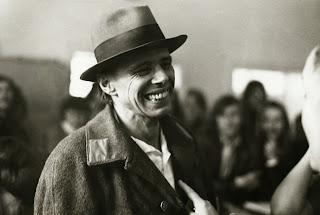 The concept of "Social Sculpture" was first introduced by the German artist Joseph Beuys (1921-1986). It can be seen in the context of the various innovative art movements of the 1960ies and 70ies which had become disenchanted by the conventional art world where art had become largely detached from life, confined to museums and galleries and considered either a commodity with a financial value or a means of entertainment. Movements like Arte Povera, Fluxus, Performance Art and Land Art tried to free art from these confines and began to look for new contexts, venues and media of expression. But Social Sculpture, as Beuys saw it, goes much further than being a mere expansion of art into a world of unusual venues and eccentric media. It dares to completely redefine art, the role of the artist in society and the sources of creativity. "Every human being is an artist", Beuys exclaims and points to the creative potential of each of us, thus removing the "artist" from his/her lofty pedestal and art from its remote ivory tower. Is there a potentially creative element in everyday life? Are there other, non-physical "materials" which are waiting to be shaped?
Social Sculpture, as the name indicates, is about "sculpting", meaning: giving shape to things. The original German expression coined by Beuys  - "Soziale Plastik" - uses the word "Plastik", which in German has the connotation of modelling a very "plastic", i.e. flexible and "mouldable" material like clay. The process of modelling in clay is one of gradually giving shape and discernible, defined  form  to an initially formless -"chaotic" - but very receptive material. Beuys's  theory of sculpture encapsulates the whole spectrum of forces and activities involved in such and similar processes in the following three-fold diagram:

This diagram contains references to the three basic principles of Alchemy (Sulfur, Mercury and Salt) as well as echoing  the essence of Schiller's treatise on "the Aesthetic Education of Man"(1).
This theory can be understood as a map of formative dynamic activities which underlie any organic process , including the human and social sphere.

Beuys himself became a prolific practitioner of Social Sculpture. This is most evident in his "actions", where he took creative practice out of the galleries and museums into the public sphere. One of these was the project "7000 oaks", which Beuys presented for the Documenta 1982 in Kassel, Germany. Over several years Beuys, with the help of many volunteers, planted 7000 oaks into the Kassel cityscape. Each oak was planted alongside one of 7000 basalt columns, thus contrasting the vital, living, growing tree organism with the inanimate, hardened, and unchangeable hexagonal rock shape. These 7000 companions have since become integral part of the city's eco-scape. In this project we can see exemplified part of the new "ethos" of Social Sculpture, where the artist understands his mission and responsibility as an agent for change, and his creative practice as socially relevant.


Beuys also was an ardent social and political activist and educator, propagating, among others, the idea of "Social Threefolding". This was inspired by Rudolf Steiner's writings on the Three-fold Social Organism (1917 -1922), in which Steiner advocated the nurturing of three independent, but mutually supportive spheres in the life of any healthy society:
- economy
- politics/legislature
- culture/education/spiritual life


The profound influence of Rudolf Steiner's writings on Beuys's Philosophy, his teachings and his artistic output  cannot be underestimated, even if his methods and outer forms seem at odds with the accepted "anthroposophical style". In a letter to a journalist Beuys wrote: "...your words deeply touched me as you mentioned the name of Rudolf Steiner, about whom I have had reason to reflect since my childhood. I am aware that it was from him that I was given the mission, to gradually relief people of their alienation from and their suspicion towards the super-sensible, and to do this in my way..." (quoted from Zumdick, Wolfgang (2001), translated from German edition).

But Social Sculpture would not be social sculpture if it was bound up just with Beuys, his seemingly eccentric personality and his individual art practice. Different people have taken up the threads and developed and expanded both the theoretical foundations as well as the creative practice and social activism. According to Shelley Sacks Social Sculpture is "a field of transformation, and nobody is outside". This epitomizes the encompassing gesture of Social Sculpture today.

So what then makes a Social Sculpture practitioner?

I was amazed to see the range of people from different backgrounds, professions, ages and nationalities who came to study in the Post-Graduate programs of the Social Sculpture Research Unit at Oxford Brookes University. Apart from people with artistic backgrounds the student body comprises, among others, medical professionals, social workers, architects and ecological activists. What unites them is their longing to develop their creative potential and to utilize this potential in their professional field for the creation of a more humane, more ecological, more just and more wholesome future.

"We work across disciplines, sectors and countries to develop connective practices, building capacities often forgotten in our work towards a future that is ecologically and socially just.
Our projects, processes and practices explore the role of imagination in the field of transformation and the relationship between inner and outer work - relating outer crises and challenges to the inner perspectives, values and habits that create them." (Shelley Sacks)


Both modules of the MA program which I am sitting in on, 'Creative Strategies' and 'The Theories and Practices of Social Sculpture",  focus on the development of imagination and on exploring the relationship between inner and outer work. Students' reading lists include a number of anthroposophical authors like Arthur Zajonc as well as post-Jungian psychologist James Hillman and philospher and cultural ecologist David Abram. A responsible attitude towards the earth and and our fellow sentient beings is seen as depending on our "response-ability", i.e. our ability to respond adequately to what comes to meet us (Shelley Sacks). Therefore great emphasis is put on the development of "new senses", facilitated by experiencing the "gentle empiricism" of phenomenological Goethean Science (2) and by studying the twelve senses (3).
Other practices which are aimed to help students in connecting to themselves and their innermost motives and intentions include contemplative work, journal-writing, free-writing and memory work. Students are asked to prepare, on their own or in small collaborative groups, "small acts", in which they respond to any chosen situation, place, theme or concern by means of  installation, intervention, performance, experiential participatory practice or in any other form. In the process of evolving this small act students are guided by their tutors to allow their imagination to unfold in an organic fashion, avoiding pitfalls like preconceived notions about the final form, or merely "illustrating" their thoughts. These small acts are then shared with the group in a "feedback forum", which in itself is a practice in phenomenological observation, with the participation of all students and their tutors.

Here follows a short video-clip of one of these "small acts" (created by Suzanne Dhaliwal and Clara Torre Cachafeiro):

What is difficult to see in this clip is that there were three objects on the floor: a normal size ceramic pot with a plant, a miniature flower pot and an even smaller (approx 15 mm tall) human figure. One had to come really close in order to see what was there. Apart from its magical beauty this piece created a real sense of empathy and concern for this miniature island world in a sea of darkness. Will the lights continue coming on and illuminating this little world?


The practice of Social Sculpture can take many different forms - there is no standard "style" or pattern - it can be provocative, poetic, surprising, engaging, thought-provoking, revealing ...
In most cases it will be in some sense participatory, meaning that it will break with the usual creator - onlooker relationship and engage / involve the spectator and make him/her part of the happening. It probably will not take place in the conventional art-setting like galleries and museums, but will aim instead to make itself accessible to a wider public. It might even not sculpt any visible "materials", but work in some other, perhaps more immediate way on the imagination of people.

(1) F.Schiller (1795) Letters on the Aesthetic Education of Man. Schiller's outlines in these letters how the human being's actions are determined by two opposing "drives" or forces: the "material" or instinctive drive ("Stofftrieb") and the "formative", rational, reasoning principle  ("Formtrieb"). Between the limiting influences of these two, the human being can open up a third realm, the realm of "play". Only there, so Schiller claims, the human being can act as a free, creative being.
(2) Goethean Science is a form of phenomenological science, based on the research method of German poet, writer and natural scientist J.W von Goethe (1749 - 1832). Goethe's way of looking at nature is characterized by an attempt to 'see the phenomenon' and thus, by avoiding following any preconceived hypothesis, to arrive at insights into the inner lawfulness behind phenomena and the underlying idea of wholeness in nature. For further reading: Bortoft, Henri, The Wholeness of Nature, Goethe's way of Science, Floris Books, 1996
(3) Rudolf Steiner suggested that human beings have twelve senses. The additional body-related senses - life, movement and balance - the sense of temperature and the three 'social' senses - speech, thinking and the sense of the (other) ego - complement the traditional senses of touch, smell, taste, seeing and hearing to create a twelve-fold wholeness. For further reading: Soesman, Albert, Our Twelve Senses (Social Ecology Series), Hawthorn Press, 1990
Posted by Axel - אקסל at 4:19 PM