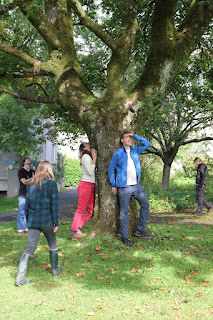 An Introduction to Goethean Phenomenology and its Integration with Art

The workshop was attended by 16 students of the Holistic Science MA program at Schumacher College and two of their tutors, D. Philip Franses and Dr. Stephen Harding. Schumacher College is an international centre for nature-based education, personal transformation and collective action
(website: https://www.schumachercollege.org.uk) 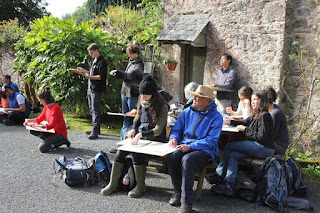 “we should not exclude any human faculties from our scientific endeavours: the depth of intuitive feeling, reliable and mindful observation, mathematical depth, physical exactness, exalted power of reason, penetrating intellect, mobile and yearning imagination, affectionate pleasure of the sensuous …”  (Goethe, 1995).

For the first practice we chose a mature Sycamore tree as our object of observation. Participants were asked to scrutinise the tree from a distance. This allowed them to perceive the tree as an object in space, displaying a certain overall shape and being characterised by specific proportions. Following a few minutes of observation, participants were asked to draw the tree as a ‘negative’ shape, as it were, formed from the outside. The drawing was to be executed in charcoal, starting from the periphery and continuing by darkening the ‘empty’ space around the tree, until the dark charcoal surface meets the outer contour of the tree, which is left as a white space of paper. No lines were to be used. The whole process consisted in a continuous process of ‘closing in’ upon the tree, until its shape became clearly defined from without. 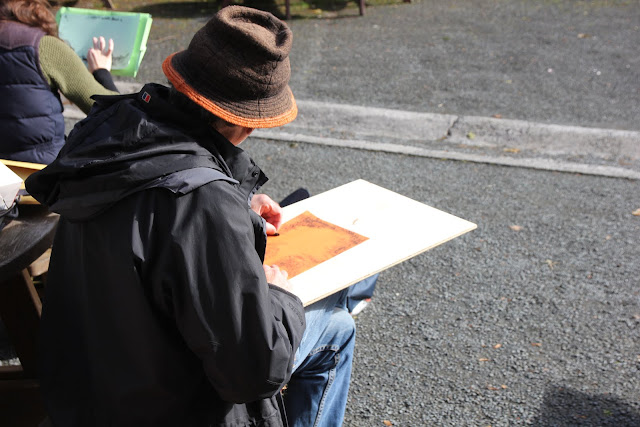 Reflection on the process

Participants found this a challenging practice because it demanded from them to work in a ‘negative’ mode. On the other hand it allowed them to constantly be concerned with ‘the whole’ of the tree shape. This approach also helped them to make sure that the whole tree fits onto the page. The process facilitated entering a gradual shaping process, which all the time allowed for adjustments. Participants also commented that this way of drawing is like bringing the sense of touch into the act of seeing, as it were, touching the shape of the tree from the outside. This led us into a short consideration of the difference between the senses of sight and touch. Both the experience of executing this drawing as well as the observation of the results gave an experience of closing in on the form, as it were, bringing it to an end.

In the second practice participants were asked to slowly walk towards the same tree they had drawn, constantly keeping the centre of the tree in focus. As they were approaching the tree, they were asked to pay attention to any change of perception and any change in their relationship to the tree, in particular the passing of any experienceable borders or ‘thresholds’. When coming very close to the tree they would start extending their gaze both upwards and downwards, paying attention to the trunk’s branching-off as well as its rooting in the ground below. Eventually they should touch the tree, using their sense of touch and any other sense in order to explore the width and texture of trunk as well as any other features. Participants were then asked to turn around, lean with their back against the tree and face the surrounding landscape - facing, as it were, the world ‘with the eyes of the tree’. While remaining in quiet contemplation for a little while, they would pay attention to any feelings or images which might arise. 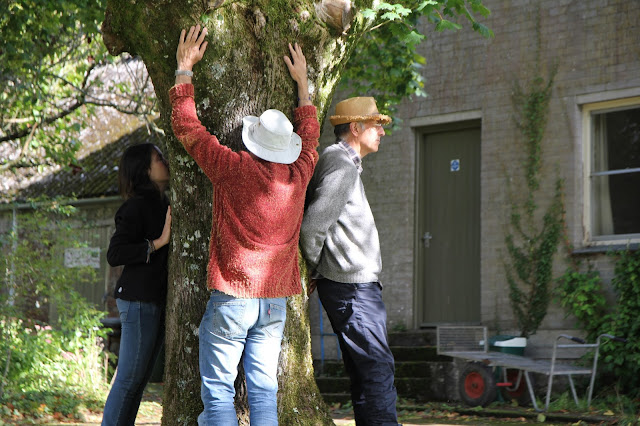 Reflection on the process:

Participants commented, that the process of this practice was like turning inside-out. Instead of looking at the tree as an object from the outside, they gradually entered a mode of identification, becoming one with the tree. For some participants this was a very emotional experience. One person experienced the tree as an “old, wise sage”. Others spoke about their connection with the tree: “the tree gave me support, like a backbone” or they related how they experienced ‘tree-ness’ in themselves: “I am like a tree, I can feel my own roots in the earth”. I summarised this practice by pointing out that the transition between our two initial practices essentially represents the transition from Cartesian, ‘objective’ science to participatory Goethean science. Both are complementing each other by supplementing the objective, ‘detached’ observation of conventional science with the element of participation in and identification with the phenomenon. The intensified inner activity of the observer transforms the phenomenon from an ‘object’ into a living entity. The living entity of the tree can remind us of how we ourselves are rooted in the earth and how we grow. A tree may become a ‘friend’, a ‘teacher’ or even a ‘wise sage’. 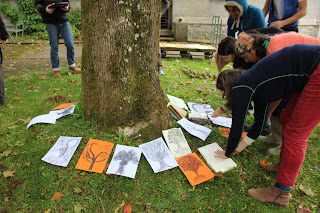 While sitting below the canopy of the tree, participants were asked to again draw the tree, but this time not from observation of its outer shape. Rather, the drawing was to be created from memorising the inner experience of meeting the tree in close encounter, from the experience of how it has manifested itself in space. Participants were encouraged to close their eyes and imagine the tree growing, from its roots down in the earth, through its mighty trunk into its unfolding branches and foliage. Then, using any drawing tool and technique, people would put this growing movement of the tree ‘in becoming’ on paper. 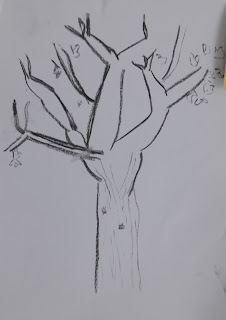 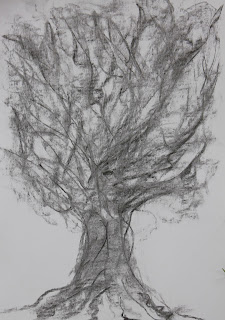 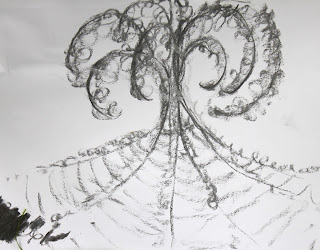 Observation and evaluation of the results

Results of this practice were quite individual and we spent some time observing them. We attempted to identify the differences between different techniques and found that each technique points to a different underlying attitude.

The following video clip summarises the first three practices and their 'turning inside-out':

For this practice we chose a mature chestnut tree on the campus. We started by making some general observations about the shape of the tree and how, in its three-dimensionality, it relates to the environment. Then participants were asked to choose one of the lower branches accessible at eye level. They would attempt a quick line-drawing of the outermost branch section, including some leaves and the end-bud. This sketch was to be made by intensely looking at the branch and following its every articulation, while at the same time tracing these articulations with a continuous line drawing on paper. During the entire drawing process people were not supposed to look at their drawing.

Observation and evaluation of the results


Participants found this approach to drawing challenging, as it involves ‘loosing control’. In looking at the sketches we could clearly distinguish between drawings made with and those made without looking at the drawing. Those sketches done without visual control of the drawing were less ‘proportional’ and somewhat ‘chaotic’, but displayed a much freer and dynamic line quality, capturing the rhythmical growth of the branch. 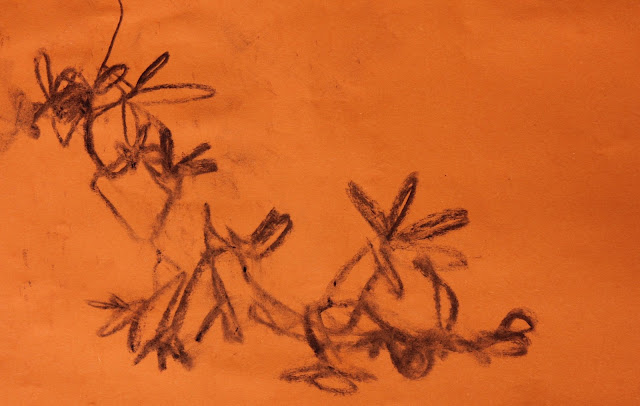 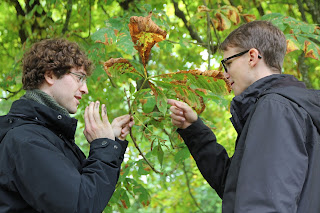 For this practice participants had to work in pairs and observe the final branch sections which had been drawn before. People were asked to look for sings of changes along the branch section up to the end-bud: How is the branch articulated? Are there any evident growth sections? What is happening between sections? Do these observations constitute sufficient ‘evidence’ for being able to argue for time processes having brought about the visible spatial shapes of the branch? Can we get any sense of the presence of past and future in what we see in this present manifestation?

Reflection and sharing of the findings:


Participants entered into a lively process of shared observation and conversation. Observations of participants included changes of colour and texture as well as the evident articulation of the branch into sections, which conveyed a sense of rhythmical growth and development together with a clear distinction between older and more recent parts.

The final practice of the morning session had been planned to consist in an attempt at mental picturing. Participants would imagine, with closed eyes, the gradual growth and development of the branch section they had observed, as it were, retracing its biography. Because of lack of time, this practice was briefly explained and left for participants to be performed individually at another time.

It was explained that in this practice we would move from a consideration of general ‘tree-ness’ to exploring individual tree ‘gestures’. ‘Gesture’ is understood as movement brought to rest in a spatial form carrying a certain emotional or spiritual meaning. We use this term in the human context as denoting one of the elements of our body language. Human beings can perform a great variety of corporeal gestures embodying specific emotions and messages. In the same sense we can speak of the ‘gesture of a tree’ as an embodiment of its individual character.
This practice, which lasted for two hours, consisted of several phases: 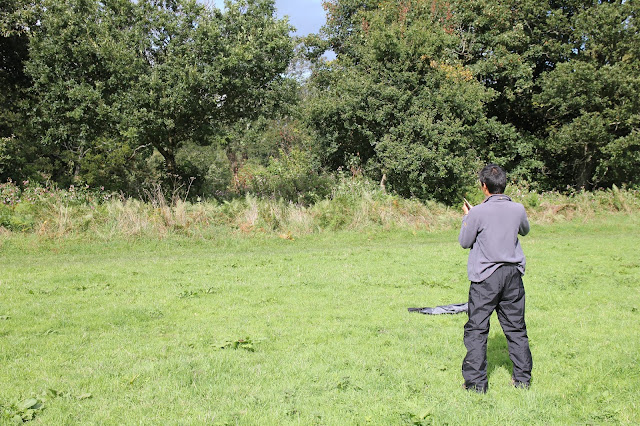 The sharing of participants’ final creations, both in visual form and in the form of short poems, was a very rich ‘cultural’ experience, giving evidence of the individual connection participants managed to create with their tree. Some of the written creations were in the form of stories, touching on personal biographical motifs. Both students and teachers expressed their gratitude for having had the chance to encounter trees in this experiential way.